Today, I braved the wilds of the backyard determined to reclaim some of it from mother nature. Armed with a push mower and a can do attitude I began early in the day before the sun turned the yard into a subtropical hell of heat and humidity. It was nice, but the bugs sleeping in the yard did not appreciate the wake-up call. They rose in great clouds before my roaring 12 hp mower and expressed their displeasure by kamikazing themselves into my face. I have now eaten a fair share of bugs. On the up side, you don’t taste them when you inhale them whole while gasping for air. Priorities… Air first, freak out about eating weird bugs later.

On a related note… I’ve discovered that am soooooooooo out of shape, I have a massive jungle of a backyard, and that I need a riding lawnmower or some rainforest stripping machinery. The first 1/3 of the back yard took 30 minutes to mow… I was lightheaded, sweating and my legs and arms were noodles when I came inside. I took a 2 hr recovery break to watch lizards, hummingbirds and drink some nice cold ice tea while looking over my stupid rotten book and:

discovered a problem…. (of course!)

I accidentally killed a main character, who is featured later in the book. *facepalm!* So now I have to go back and change “Todd” to “nameless baddie who gets gutted by a panther” or something equally ambiguous.

At noon, when I decided I’d recovered enough from the earlier mowing and needed to work off some frustration with the book.d I did some more mowing. Interestingly enough, it’s now hotter than it was earlier and I am once again sweaty and noodle legged. Didn’t take nearly as long for heart and lungs to return to normal patterns. I am encouraged that maybe I’m not as out of shape as I thought.

I’ve learned that my neighbors have 0 craps to give about me mowing my lawn and nearly dying while doing it. Of course, most of them are older than me, so they have riding lawnmowers because they are smarter than me. Hubby usually does the mowing but he is not here and the lawn cannot wait for a month to be mowed.

I found a severed grasshopper leg in my shoe and I’m totally grossed out now. I guess I should be grateful that it’s not a lizard leg and still moving.

Tonight for dinner… we’re having whatever’s left from the weekend. That means a potpourri of spaghetti, tacos, and chili. I predict heartburn but as I’m wiped out.. that is dinner. The boy can fend for himself, as for me? I’m full on bugs and I think I deserve ice cream. I think if it rained right now, I’d go play in it. 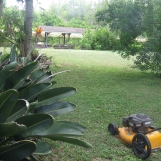 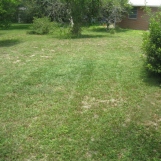 4 thoughts on “Unsupervised day whatever it is:”